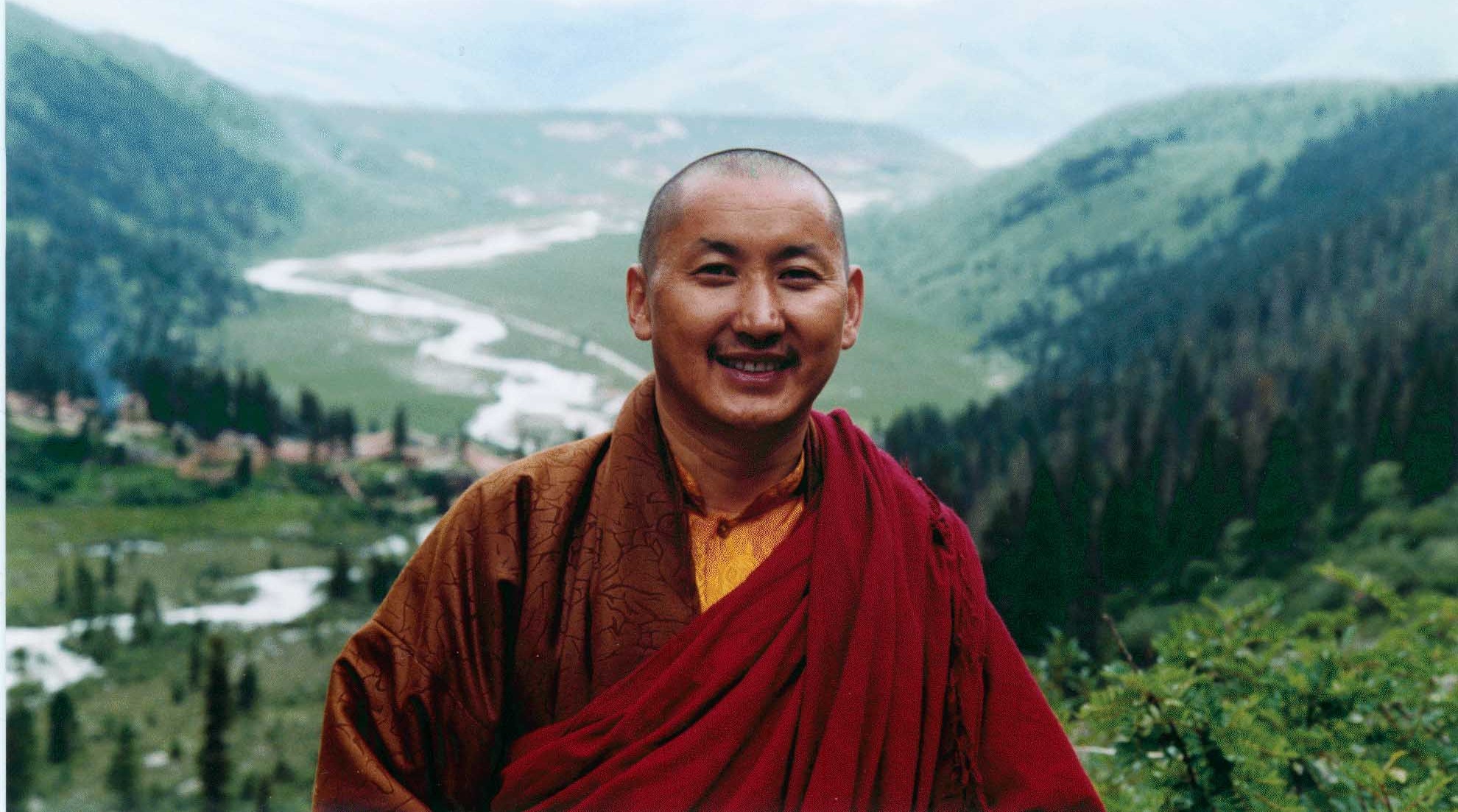 The first Patrul Rinpoche was born in 1807 in Dzachuka, a region of Khams, and was recognised as an emanation of Chenrezi and Shantideva by Do Drupchen Jigme Özer. He studied the sutras and the tantras at Dzogchen Shri Singha University and achieved the highest honours. He became a great scholar and teacher, especially associated with the promulgation of the Dzogchen Longchen Nyingthik teachings, which were transmitted to him by his principal teacher, Jigme Gyalwa Nyugu, one of the three great students of Jigme Lingpa (the holder of the Nyingthik lineage), and by Dzogchen Rinpoche IV, Mingyur Namkhai Dorje.

He wrote many texts, including the famous Künzang Lamai Shalung (translated into English as The Words of My Perfect Teacher), a very clear and inspiring introduction to the Dzogchen teachings. Many great lamas of the time, such as Kathog Situ Rinpoche, Dzogchen Rinpoche V and Tertön Sogyal Lerab Lingpa, all came to him for transmission of the Nyingthik teachings and through his activity he was able to expand this precious Dzogchen lineage and ensure its continued transmission for the benefit of all sentient beings.

Always the wanderer, never owning property or his own monastery, and often remaining incognito, he taught in his compelling and unique way, altering his style to suit his listeners. In 1887, at the age of 80, he called all his students to him and prepared them for his passing away by reminding them that everything was impermanent. He welcomed them to ask him questions to clarify any doubts they might have, and gave them his final blessings.

The second Patrul Rinpoche was born into the family of Ranyak Drupchen Rinpoche, a famous crazy wisdom lama, and was recognised by Dzogchen Rinpoche V, Thübten Chökyi Dorje, as his own tsawai lama. After studying at Dzogchen Shri Singha University he went to the province of Amdo in the north east of Tibet to spread the teachings there. At the age of 25, when an argument broke out among his entourage, he said that he would leave unless they listened to his advice and ceased to argue. As the dispute showed no signs of abating, he went into retreat and seven days later having transformed into the Dharmakaya rainbow body, all that his students found of him were his hair and nails.

Each of the succeeding re-incarnations of Patrul Rinpoche have been born into the Ranyak family, as have many other great lamas. Ranyak Drupchen Rinpoche’s grand-daughter was the sister of Patrul Rinpoche III, who was recognised by Dzogchen Rinpoche VI, Jigdrel Shangchub Dorje. He passed away at the early age of twenty-one after the destruction of monasteries in Tibet and the banning of religious practice there by the Chinese authorities. Saying that no useful purpose could be served by his remaining, he fell ill and passed away.

Before he died he said to his sister, with whom he had a very strong connection, that she was not to worry and that they would be seeing each other again soon. When her second son was born he was recognised as the fourth Patrul Rinpoche, but it was decided by many lamas not to make the news public because of the continuing obstacles to the activity of the Patrul tulku.

The fourth and present re-incarnation of Patrul Rinpoche lived with his family until the age of fourteen, when he entered Dzogchen Monastery. As a child he did not need to learn how to read because his father had only to show him the alphabet and the different combinations of letters in the Tibetan script once and he was able read. He had no formal education at this time and lived the life of a simple country boy. He was remarkable at that time for not eating meat, which is quite rare among the nomads of Tibet who have little else to eat.

When he entered Dzogchen monastery he was ordained a monk by Choktrul Drukpa Kuchung Rinpoche, the re-incarnation of the famous crazy wisdom lama, Drukpa Künley, from whom he received numerous teachings and transmissions. He stayed in Dzogchen Monastery for six years, where he studied and practised all the monastic disciplines, such as chanting, sacred dance and music, painting, mandalas, tormas and recitation, until he had mastered them all perfectly.

He then transferred to Dzogchen Shri Singha University, where he studied with many great scholars. Among them were Khenchen Dechen Namdröl, Kyabje, Dzogchen Rinpoche, Choktrül Drukpa Künley Rinpoche, Choktrül Pema Kalzang Rinpoche, Choktrul Tokden Tülku Rinpoche, Khenchen Dawai Özer, Khenchen Pema Tsewang, Khenchen Künang Özer and Khandro Dasal Wangmo, the re-incarnation of Draku Lösal Wangmo, all of whom transmitted to him the deep and vast treasury of the Buddha’s teachings and bestowed on him all due honours and the degrees of Khenpo and Dorje Lopön at the end of his studies.

After the death of his mother he spent one year in solitary retreat in the cave that became famous as the one which was used by the first Patrul Rinpoche. He has become particularly well known for his transmissions of the Phowa teachings, which have always been attended by large numbers of practitioners, both lay and ordained.

The first Patrul was highly regarded by all schools of Tibetan Buddhism. He lived during the time of the Rime movement and was one of its great defenders. Rime was a movement which encouraged respect for the lineages and traditions of each of the different schools, and which sought to preserve and disseminate all their various teachings. Patrul Rinpoche was renowned for being able to teach the texts of each school in the manner and style of that school, and it is a fervent wish of the present Dzogchenpa Ranyak Patrul Rinpoche to continue this approach.

Patrul Rinpoche is presently residing in Brussels, where his growing number of students, have requested him to remain and teach.